skip to main | skip to sidebar

The Forge 1.0.4a Nearing Completion

The next alpha version of The Forge is nearing completion.  This new version will solve a lot of the bigger problems with The Forge and also be the first release to have a User's Manual.  Version 1.0.4a is not expected to be the last alpha version in the 1.0 series.  In fact, we will likely have two more, beyond 1.0.4 before moving to beta status.

The only thing remaining is to finish up the first draft of the User's Manual.
Posted by RB Whitaker at 2:39 AM No comments:

A new alpha version of The Forge has been released on SourceForge!  This version is still an alpha version, but it contains a whole slew of interesting upgrades and bug fixes.  Anyone using an older version should upgrade.  I double-checked both the i586 and amd64 packages, and both should be working without any problems this time.

The Forge 1.0 alpha released on SourceForge!

The Forge 1.0 is finally at an alpha state (for real this time)! With the recent feature freeze, we were able to determine exactly what needs to be in this version of The Forge, and what can wait until version 1.1.

We've got it all set up on our page over on SourceForge.net: https://sourceforge.net/projects/theforge/

Download a copy today! We have working versions for both AMD 64-bit architectures and i586 architectures, so that should cover everyone on Windows. If you're on an AMD 64-bit system, click the View All Files button. Open up the .zip file and run the .bat file.

Note:  It looks like the i586 version requires you to make a single change to get it to work correctly.  When you unpack the .zip file, rename the .jar file from 1.0.1.75a.jar to TheForge.jar
Posted by RB Whitaker at 7:16 AM No comments:

While version 1.0.1.69dev was officially released yesterday, I continue to struggle to find a decent way to deploy applications to the world. My current host, Wikidot, only allows files up to 10MB in size. The actual Forge application is much much smaller than that, but with all of the OpenGL libraries that are needed, it puts it just a little beyond that limit. If I deploy with Java Web Start, I can link to some online JOGL files, but Wikidot isn't properly configured for Web Start. Perhaps my only real option is to move ahead with SourceForge right away....

Anyway, while that is going on, I'm moving ahead with wrapping up an alpha version of the program. As of right now, the only real feature left to complete is to allow menu items to have specific options that they can configure with a button on the right side of the menu item. Wings' version is shown below: 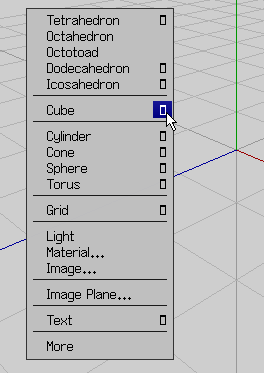 I've now got that showing up in the menus of The Forge, as shown below: 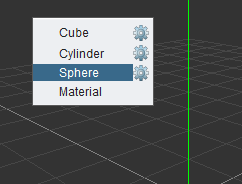 I still have some code cleanup to do, and I need to wire it to actually work. This is the last feature needed for a working alpha version (for real this time).
Posted by RB Whitaker at 10:16 PM No comments:

The user interface is now basically complete, as we take another big step towards a completed version 1.0. This version updates the menus to the requirements for version 1.0, including a select menu, a view menu, and renaming the window menu. It also adds in the rest of the Geometry Window toolbar, allowing for quick access to opening and saving files, as well as undo and redo.

Check out the screenshot below: 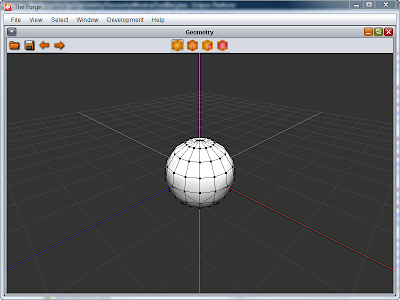 Posted by RB Whitaker at 7:54 PM No comments:

The Forge is finally available for download! The first public release of The Forge, version 1.0.0.63dev has been released over on our Wikidot page.

The version on the web only works for AMD 64 bit architectures. We're running in to some complications from the Wikidot framework, so that is all we're going to be able to post for the moment, but I'm in the process of working out a better solution that will allow for deployment on virtually any architecture, including i586 Windows, Mac, and Linux. That may be in place by the next public release.

Feel free to download a copy and give me some feedback!

OK, in the last post I said that we had reached 1.0 alpha, but once again, I'm going to have to take that back. I've been thinking about it, and there are a few more features that we need in version 1.0. So in this post, I'm going to list those extra features here. But this is the final list of features for version 1.0. Any other new features will have to wait until version 1.1. This is the 1.0 feature freeze!

1. Change the View menu to a Window menu.
2. Add a view menu that lets the user reset the view, or view along a coordinate axis (like the x-axis).
3. Add a select menu, that has the option to deselect everything (space bar) or select more (selects adjacent objects).
4. Allow for advanced modifier/primitive options. For instance, you want to add a cylinder, which has a certain number of sides by default. But lets say you want more or less than the default of 16 sides. You can click on the little box on the right end of the menu item to choose specific options before adding in the cylinder. Many modifiers do not have this, but a few do. Wings indicates that you can do this with a simple box on the right side of the menu item.

Those are the only requirements left for version 1.0. Additionally, there are a number of other things that still need to be done before the final version of 1.0 is released, including some form of a User's Guide, the mouse cursor needs to be hidden (and not actually move) when you activate a modifier, normals need to be fixed, the menu bar needs to be readjusted to center the mode buttons and add in open, save, undo, and redo buttons on the left side, and I would like to also start putting together an art gallery of work made in The Forge. Many of these things will only come in time.

Also, one further note. In my last post, I mentioned that I had an alpha version ready, but it was extremely buggy. I said at the beginning of this post that it was technically not an alpha version yet, but I've fixed the real killer bugs in it, and it is fairly stable now. Not perfect, but reasonable. I will be releasing the first public version of The Forge within a few days. I'm just working out the details of a good deployment scheme, and the world will be able to get a free copy of The Forge! Speaking of that, let's add one more thing to the list of things that need to be done by the final release of version 1.0: a good deployment scheme.
Posted by RB Whitaker at 7:22 AM No comments: